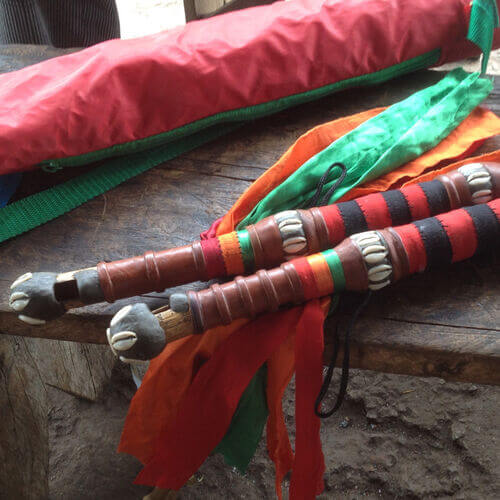 Listen to the full episode audio, or read the transcript with step-by-step breakdown below.

Back in 2015, after a decade and a half of intensive travel in West Africa, I decided to create an album of original compositions, using only traditional instruments.

I wanted this album to be a sort of informal musical thesis that could bring together what I had learned in West Africa, and feature the instruments I had studied. These included the Fula flute, which is my primary instrument, along with the balafon, kamale ngoni, and the Mandinka drums: djembe, sangban, dununba, and kenkeni.

The idea turned into a bit of an obsession, and after kicking the idea around for many months, I dedicated a whole summer to making it happen.

The result was a project that I call Afroflute (which you can download here!)

After completing the first four songs, I brought the music to Guinea and shared it with my teachers. They not only approved of my project, but loved it! Before long, my songs were being shared around from friend to friend, and I’d hear them streaming out of the tiny speakers of cheap cell phones in Conakry.

Drawing Inspiration from the Tradition

One of the songs on the album that most represents the totality of my studies is called Soli de Daouda Condé. The name comes from the family of Soli rhythms, which are played for initiation ceremonies in the village. Since my flute teacher, Lanciné Condé, was a specialist in Soli music, I wanted to create a rhythm and melody that paid homage to this tradition. Because my friends in West Africa call me Daouda Condé, I figured this new arrangement might as well be titled Soli de Daouda Condé.

Here’s a step-by-step breakdown of the process I used to compose the rhythm and song.

I knew this rhythm had to be in 12/8 time signature, since Soli rhythms are generally in 12/8. So I started with a simple balafon riff that alternated between a “three” and “four” feel in the same measure. It sounded like this:

I liked the balafon phrase, and thought it had potential for a groove and a melody. So my next step was to come up with a Fula flute accompaniment. It also didn’t need to be too complex, as I knew there’d be a lot of other elements in this song. Here’s what I came up with:

I spent some time playing along with these balafon and flute parts, and worked on finding a melody that could serve as the main theme or hook. After a lot of experimenting and refining, I ended up with this melody:

With that, it was time to start building the drum ensemble! Since I thought this might end up being a somewhat challenging polyrhythm, I used the standard 12/8 djembe accompaniment pattern, which functions as a time keeper:

To compliment that, I used a simple off-beat kenkeni pattern that is used in some Soli rhythms:

So far, so good — nothing too tricky. With the sangban, I wanted to play a pattern that really reinforced the 3 against 4 feel that I love so much about West African music. I’d say this was one of the trickiest things to get right, since the sangban is the heart of any rhythm.

The dununba needed to play off of the melody of the sangban in a way that created a unique and somewhat melodic polyrhythm. Here’s the pattern I came up with:

With that, I had a complete polyrhythm. Along with the melodic elements of the flute and balafon, this polyrhythm would serve as the groove of the new piece. Here’s the drum arrangement so far:

One of the things I’ve always loved about the African ballet tradition, particularly Les Ballets Africains, is that their arrangements use synchronized rhythmic introductions. So I wanted to compose an intro in this same style — something that had power and momentum going into the groove. I came up with two separate phrases:

Here’s the piece in its entirety:

Fula flute, balafon, djembé, and ngoni come together in this joyful musical romp through the highlands of West Africa.