Click an album cover to hear samples and learn more. 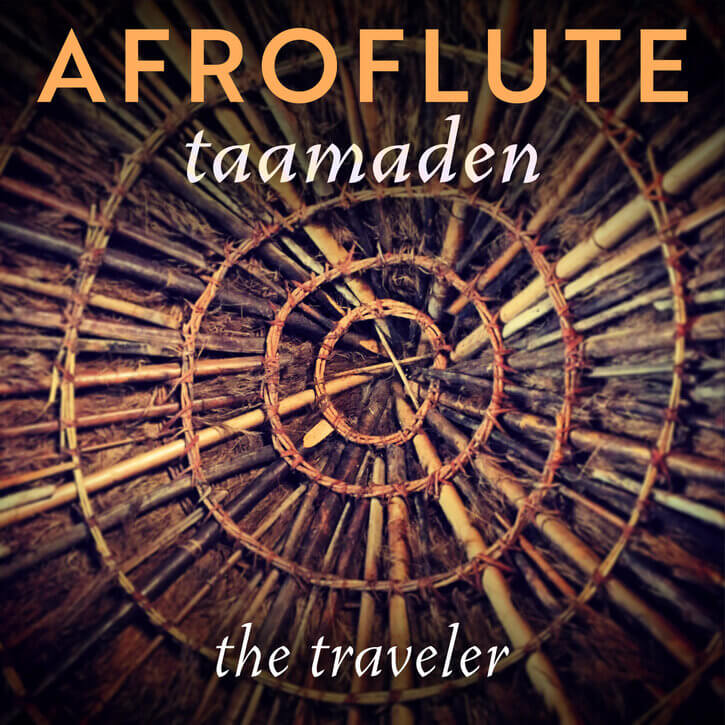 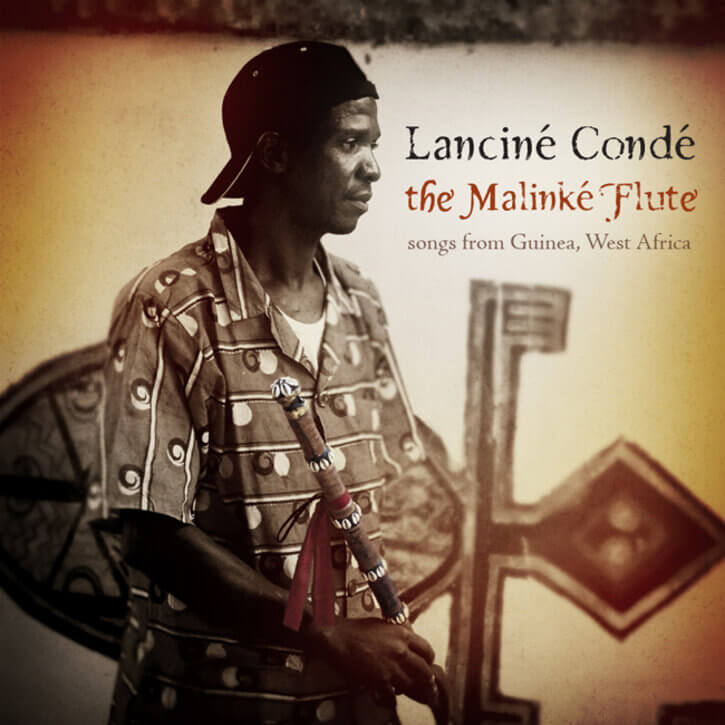 In the Studio with Dave Kobrenski 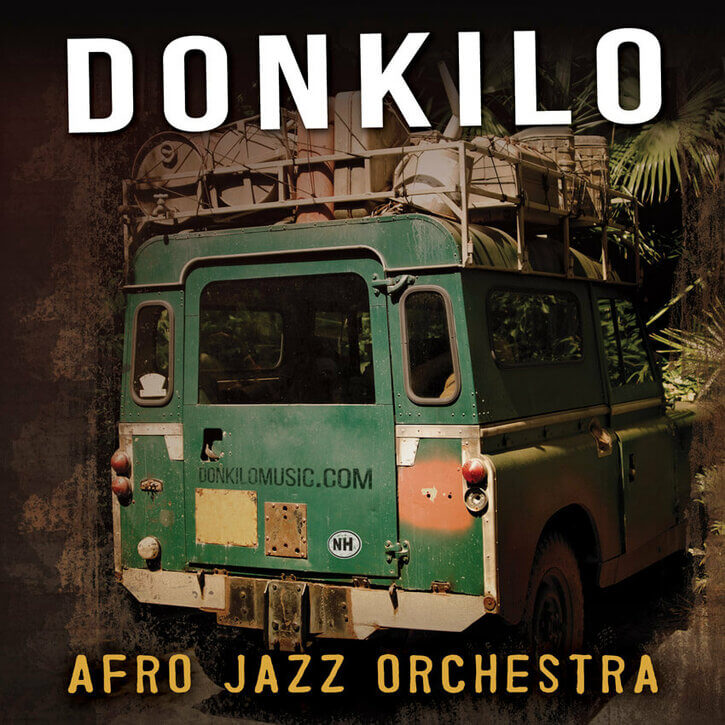 A distinct new fusion of jazz, funk, and Afrobeat. 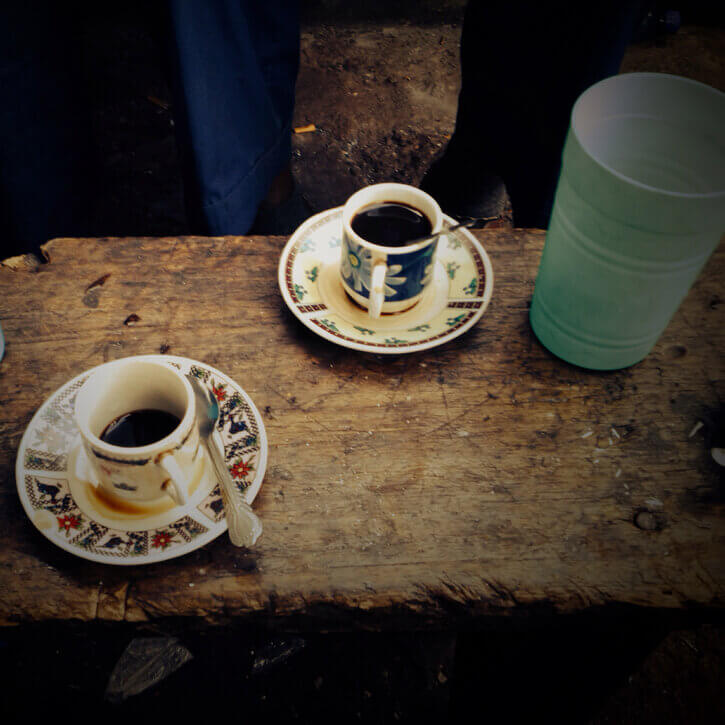 Two flutes: a master and his apprentice bring ancient songs to life. 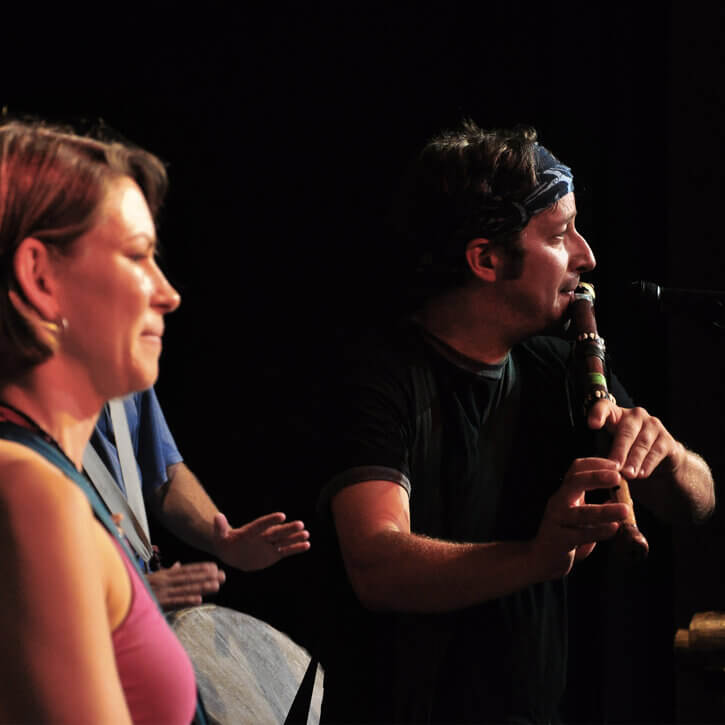 Rhythms and Melodies of West Africa

As a musician, my work as a multi-instrumentalist and composer is inspired heavily by my years living and studying music in West Africa.

Between 2001 and 2016, I traveled extensively in West Africa to study traditional music with master musicians, including Famoudou Konaté, Sayon Camara, Nansady Keita, and more. My apprenticeship with Lanciné Condé, a master of the Malinké flute tradition, lasted for fifteen years until Lanciné’s untimely death in 2021.

In Africa, I became proficient at the Fula flute, kamale ngoni (10-string harp), djembé, and more. Combined with my background in jazz improv, my compositions and performances are exploratory, genre-crossing affairs in which I’m always seeking to discover something new. 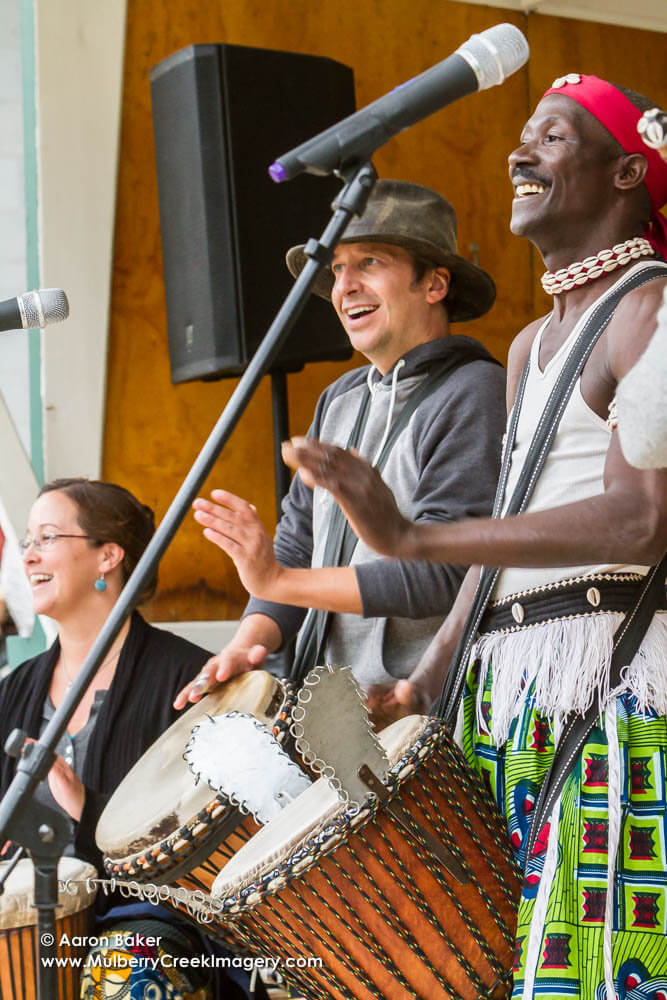 The Fula flute (known as tambin in the Fula language) is a little-known type of flute with its origins in West Africa. Traditionally played by the Fulani people of the Fouta Djalon region of Guinea, it is also been incorporated into the traditional music of the Malinké people, who primarily inhabit regions of Guinea and Mali, and live in close proximity to the Fulani.

The tambin is a three-holed flute constructed from a conical vine that grows along the Niger River and in the forest region of Guinea. Its embouchure (mouthpiece) is typically constructed from a special beeswax mixture, which is heated and shaped to the flute and the player’s liking. Often decorated with cowry shells and other decorations, the vine is sometimes covered with leather or other skin, to strengthen the flute and protect it from cracking.

The tambin is a beautiful instrument both in sound and appearance, and is capable of creating stunning and often profound melodies. It uses a scale that is roughly equidistant (consisting of seven whole tones), and has four “registers” that are accessed by variations in breath (ie, overblowing), with a total range of roughly an octave and a half. While the scale of the traditional Fula flute does not match our Western scales precisely, it can approximate a diatonic scale and when played with Western instruments (guitar, etc), the tambin adds a tonal coloring that is unique and interesting. 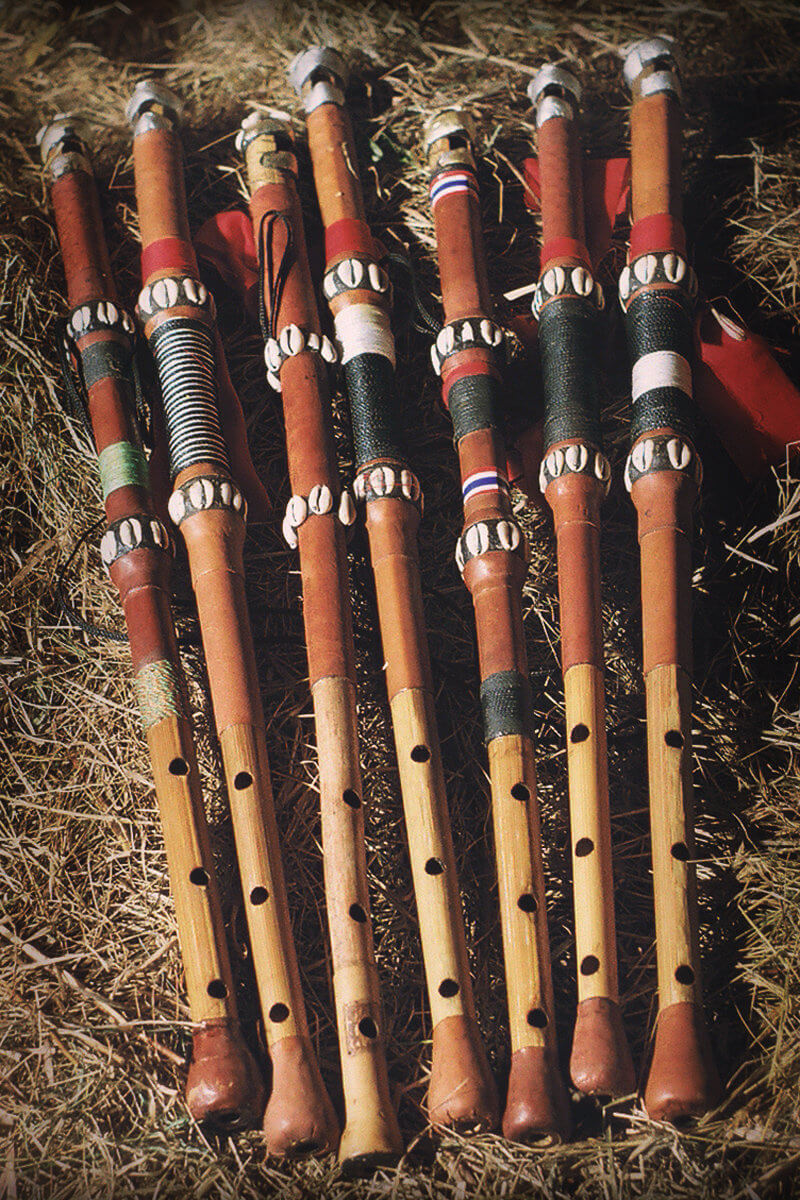 Tambin (flutes) made by Lancine Conde in Guinea, West Africa.

The kamale ngoni is type of West African stringed instrument, constructed from calabash (or wood) for its body and bamboo (or other wood) for its neck. Harp-like in nature, the kamale ngoni is a derivative of the older and more traditional donso ngoni (hunters harp), originating in the Wassoulou region of Mali. The donso ngoni, played primarily for hunting ceremonial occasions, has six strings and a deep, haunting sound.

A relatively new invention, the kamale ngoni was created as a modern derivative of the donso ngoni within the last 50 years, as a means of playing popular music. Tuned higher than its donso equivalent, the kamale ngoni (literally, the “young man’s harp”) often has 8, 10, or 12 strings. Its creation gave rise to the genre of popular music know as Wassoulou music, for the region from which it comes, and is heard in modern music throughout West Africa today. Artists such as Oumou Sangare, Issa Bagayogo, Salif Keita, and many others have use the kamale ngoni in their music with much success.

The kamale ngoni is typically tuned to a pentatonic scale. Its two rows of strings are plucked with only the thumb and forefinger. Traditionally, the strings were made of stretched gut, but today it is quite common to see the ngoni made from nylon fishing line. Other instruments related to the kamale ngoni are the cora (21-stringed harp) and the bolon (3-4 stringed bass harp). 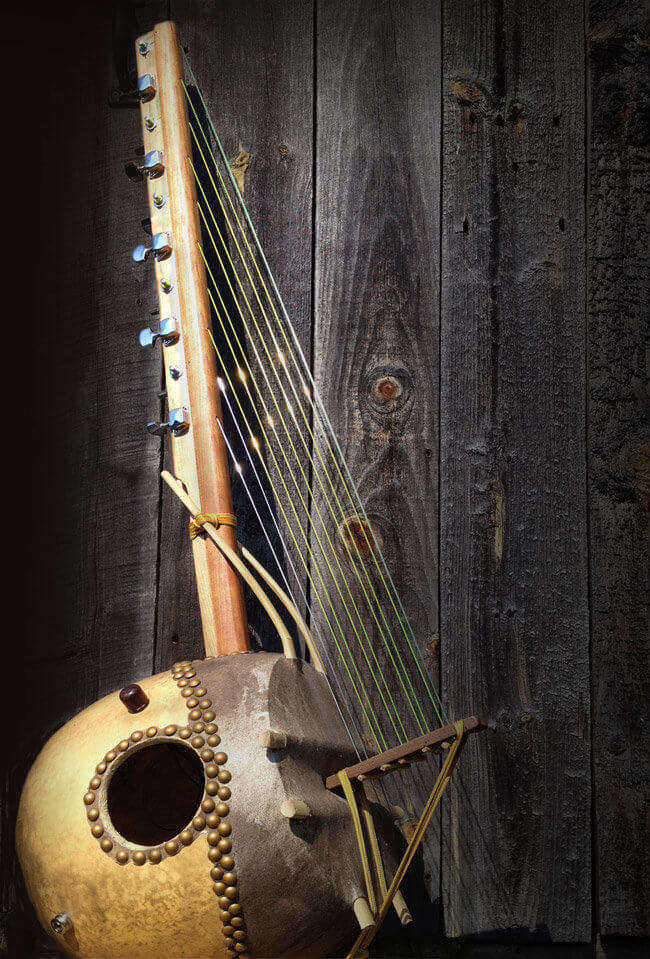 The djembe is a skin-covered drum made form wood that is played with the bare hands. Originating in what is now Mali and Guinea, the djembe has a great history for the peoples there and has much significance both musically and culturally. The djembe likely has its origins with the Malinké blacksmith caste (known as Numun). According to the Bamana people in Mali, the name of the djembe comes from the saying Anke djé, anke bé which means “everyone gather together in peace”. (source: Wikipedia)

The djembe shell is constructed from a solid piece of wood, and traditional woods include the Lenke (or Lingué), “African Mahogany” (Acajou), Bala wood, or Melina wood. Goat skin is stretched across the top, and rope woven between and metal or leather “rings” are used to attach and then tighten the skin, achieving a range of sounds.

Traditionally, three sounds are created on the djembe; from low to high: the bass, tone and slap. Players of the djembe in West Africa (know as djembefola) spend many years perfecting the technique of the djembe. The music played on the djembe is complex and has evolved over many centuries, and typically the djembe accompanies three bass drums: dununba, sangban, and kenkeni. Together, these drums can create complex polyrhythmic patterns.

The djembe has received much widespread attention in recent decades, due to the rise and success of several of the national ballets (performance troupes) that have come from West Africa. These troupes have also had their stars; djembefolas like Mamady Keita, Famoudou Konate, Fadouba Oulare, and many others have continued to perform and teach their music to students around the globe. 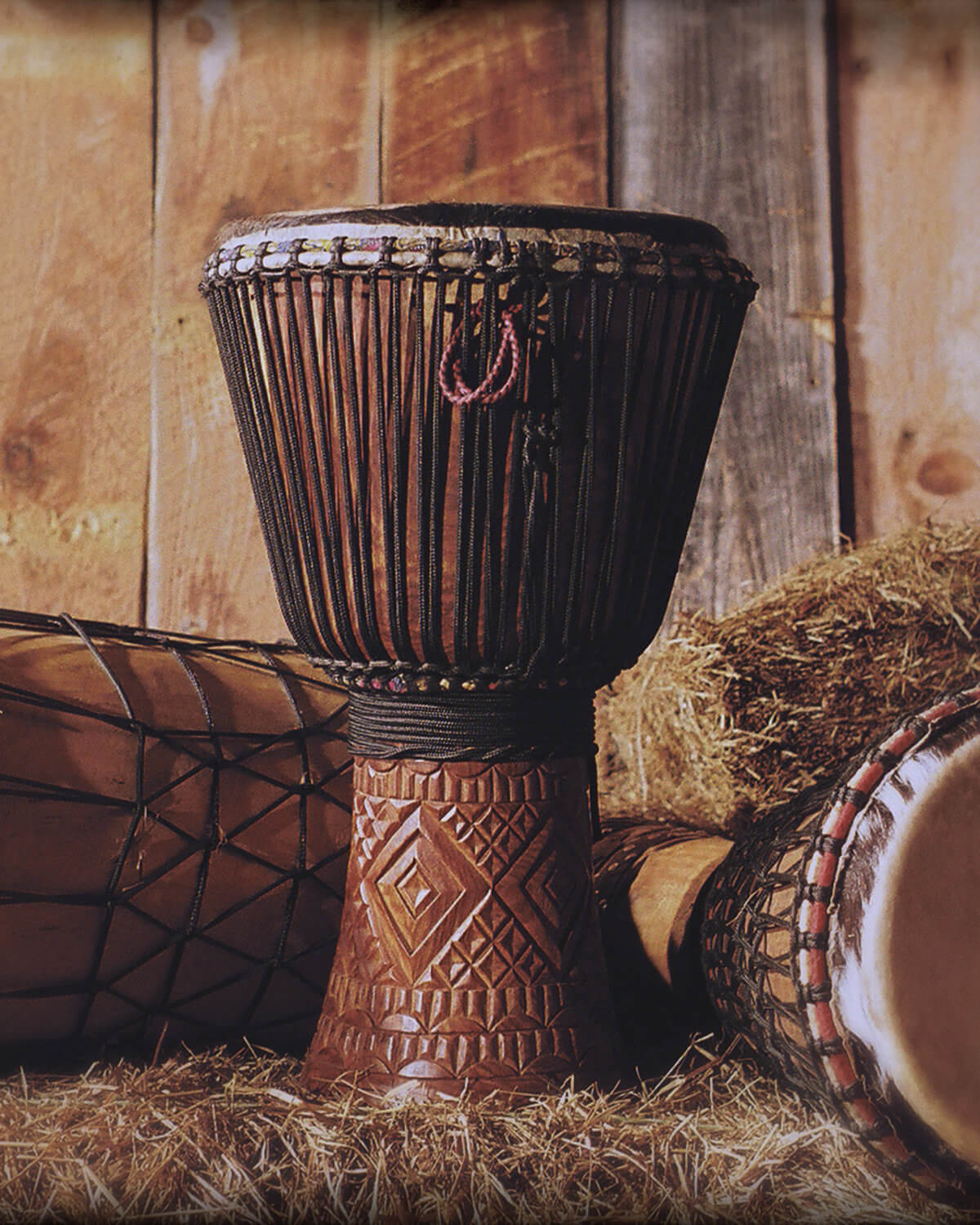