This drawing is part one of the Dembadon series. The Dembadon is a pre-marriage festival for the bride-to-be, and is quite common in Conakry, Guinea. The festival features much drumming, singing, and dance. At the Dembadon, the bride-to-be is honored, and it is a time for her to celebrate with friends and family, and, in some cases, say goodbye to them as she goes to start her new life with her new family.

In this drawing (part one of a three-part series), I’ve depicted the sangban player at a Dembadon festival. “Sangban” is the name of middle of three drums in the set of dununs (bass drums), and sangbanfola means “one who makes the sangban speak” — and is a generally compliment to the abilities and competence of the player!

In the capital city of Conakry, Dembadon festivals are an important part of how musicians earn an income playing traditional music. The musicians are fed before the event in a communal meal, and during the festivities, money is thrown to (or placed on!) the drummers and dancers, and is collected at the end of the festival to be split up equally by the musicians. Usually lasting several hours, the festivities are led by the exuberant singing of the griottes, accompanied by the full ensemble of drummers (djembe, dununba, sangban, and kenkeni drums).

The music played during the Dembadon is usually in the family of Soli rhythms, but nowadays it is quite common to also hear rhythms in the dununba family — the dance of the strong men — and danced by everyone!

This artwork is included in my book Drawing on Culture: An Artist’s West Africa Travelogue, which is available to purchase here. 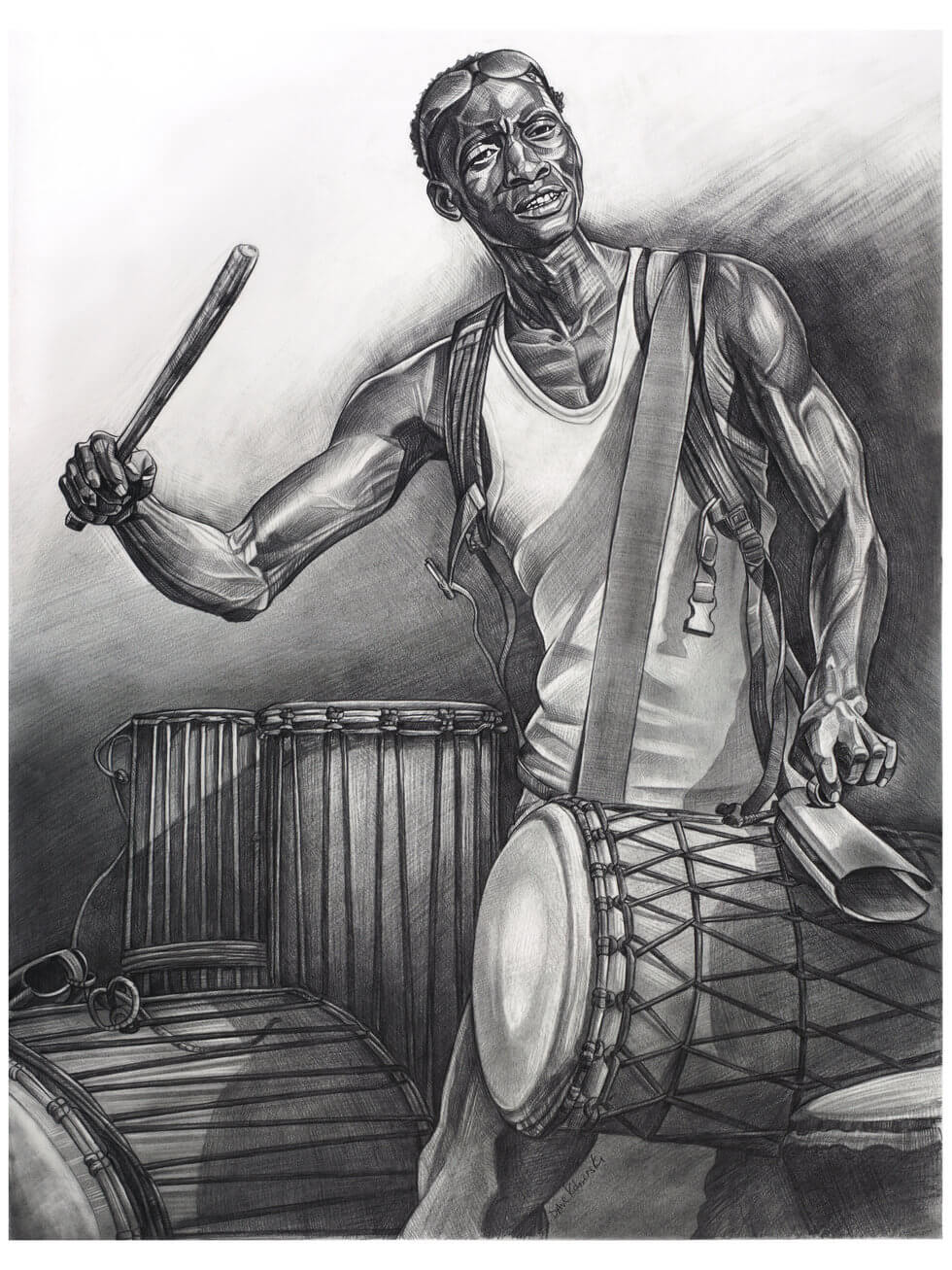 Here’s a little bit of the drawing process!

Click any image to view larger, and use your right/left arrow keys to scroll through ‘em. 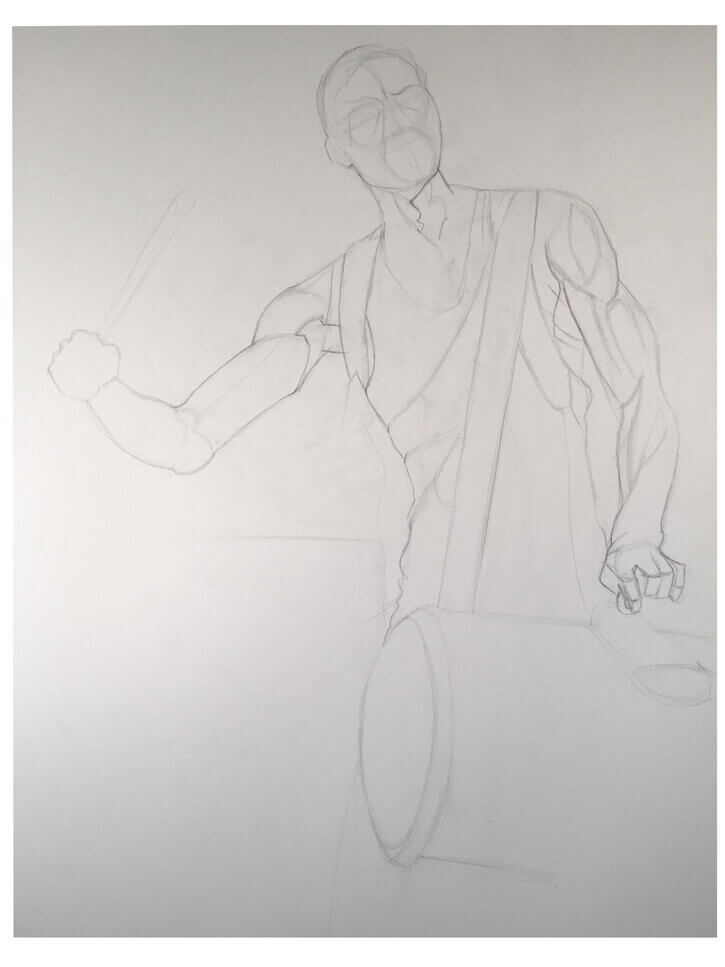 Blocking in the form, focusing on the major shapes, and really thinking about movement of the lines, that will help depict the energy and tension of the pose. 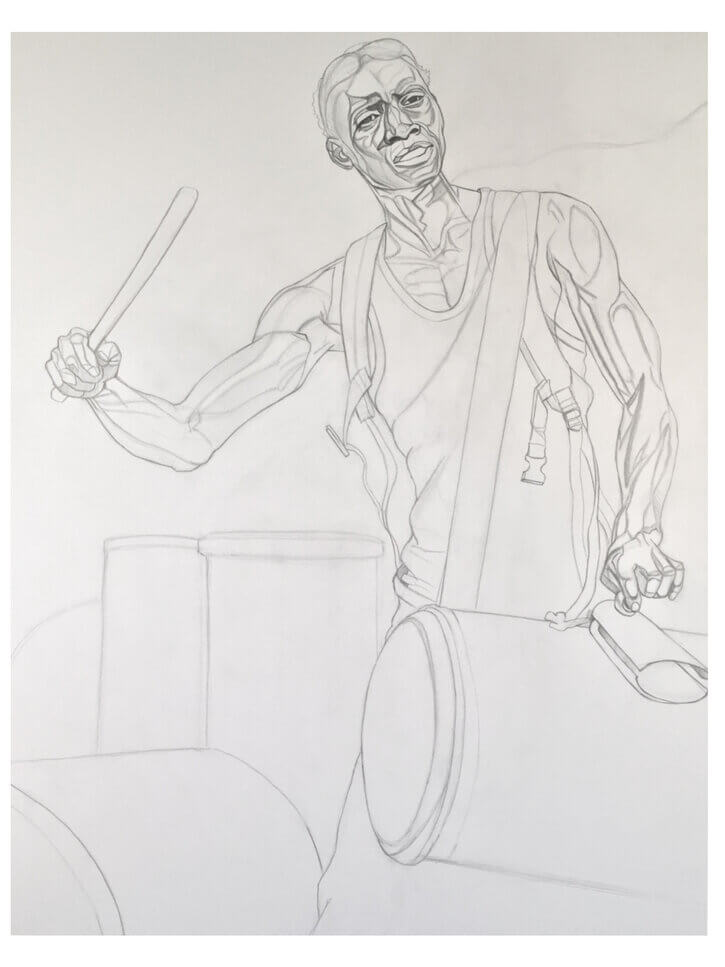 Now that I have the basic form down, and I’m liking how the composition works on the paper, I’ll start adding some more details, focusing on capturing the facial expression of the musician. 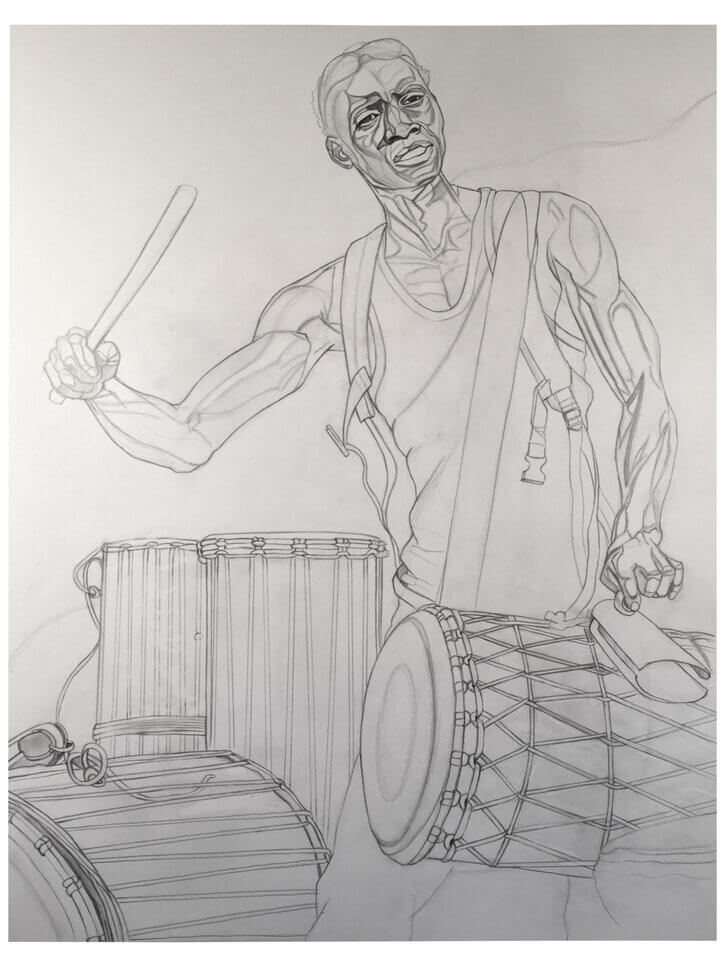 I’ve gone in and blocked out the muscle groups and done some shadow mapping (delineating the boundaries between light and dark that help depict the forms), and now I’m going to focus on drawing these drums…lots of details, but I’ve decided that to properly tell the story, the drums have to be rendered completely. Good thing for coffee…and patience. I’m in for a long drawing! 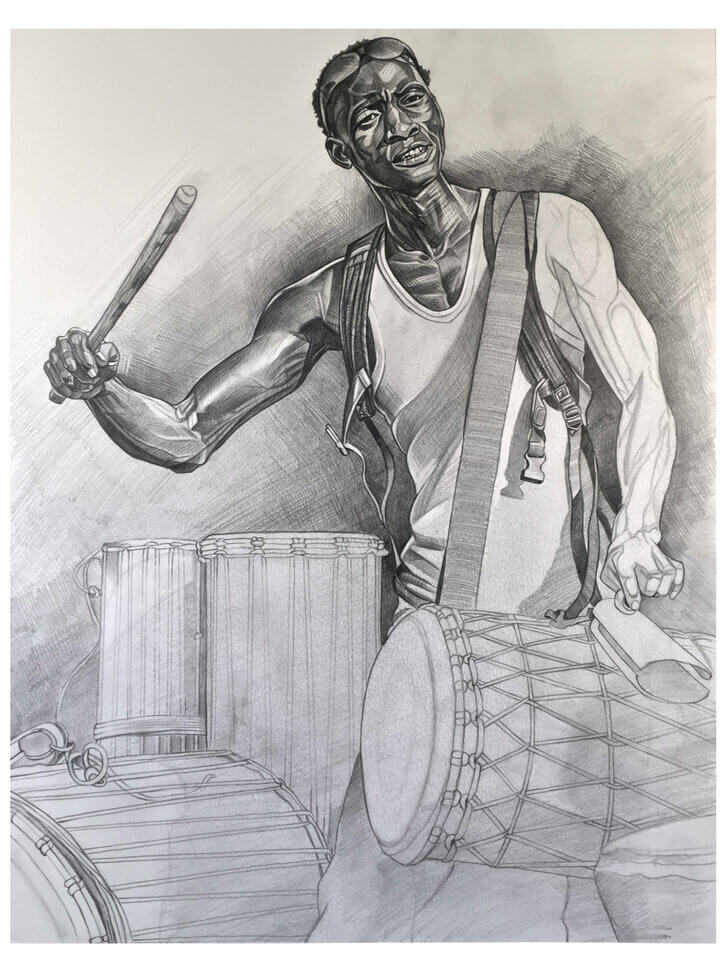 At this point, I can see that this is going to end up being a pretty detailed drawing. It will be a challenge to orchestrate all the parts so that they work with the whole. I’m going to start working up my value range here while rendering the form more completely. I’ve also got to really think at this point about creating a good focal point, and making sure that all these little details don’t end up being distracting in the end. I know I’m going to have to push the drums into the background, and really work with the full value range to get this piece to work. 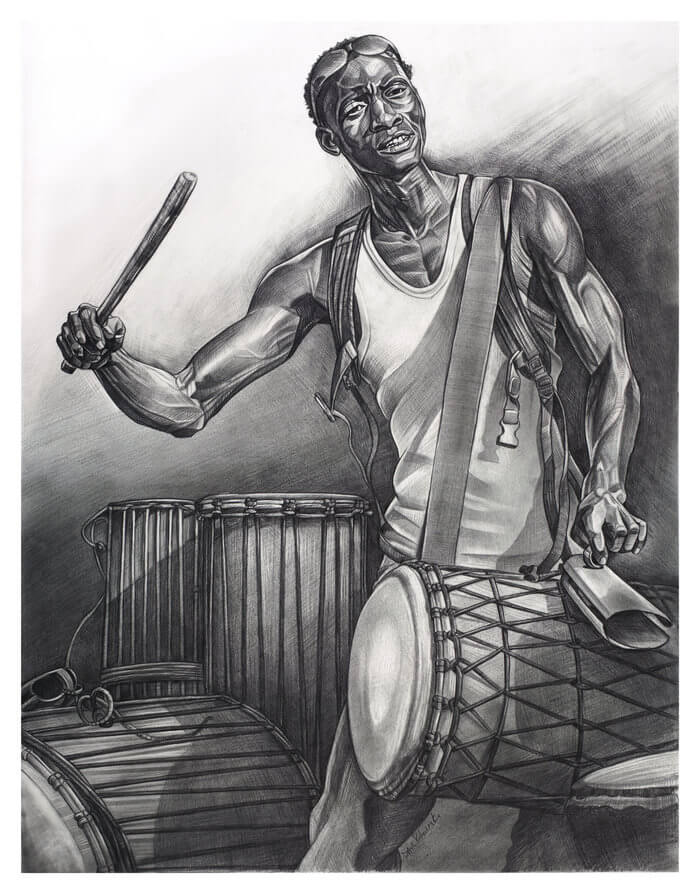 In the end, you can see that I’ve pushed the drums into the background quite a bit, to a make sure they they don’t end up taking away from the figure in the foreground. Also, the ropes on the drums took forever to render! I wanted to make sure that the instruments were accurate though.

I’m happy with how the anatomy of the figure played out, and drawing all those muscles was a great learning experience. I hope you’ve enjoyed this piece as much as I enjoyed drawing it. Cheers! 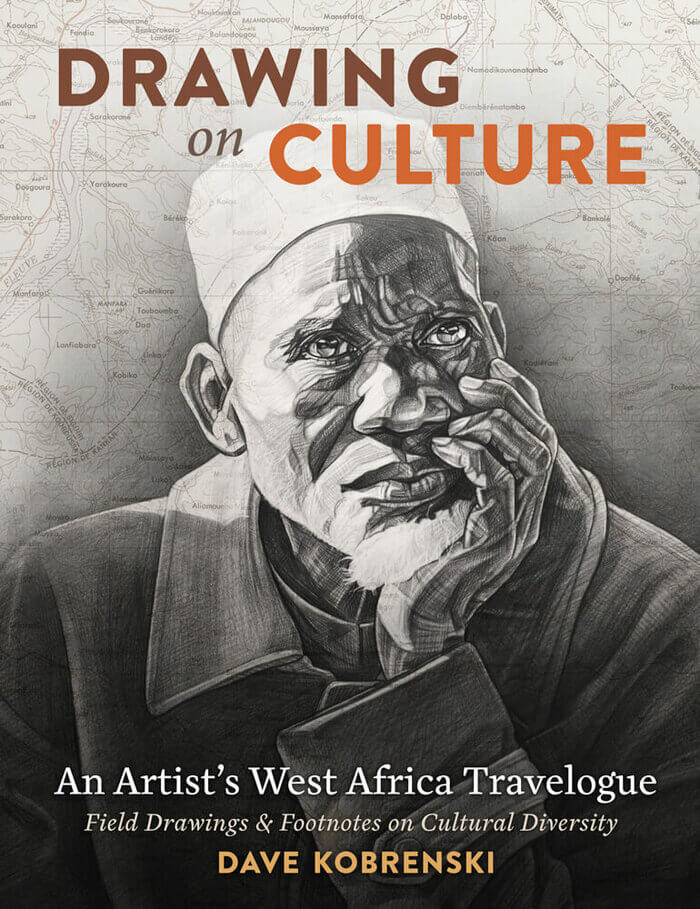 In Drawing on Culture, artist and ethnomusicologist Dave Kobrenski takes readers on an artistic journey of cultural discovery into the heart of West Africa.

“Dave Kobrenski is a gifted artist and musician, and a better anthropologist than many of the PhDs I know. Here is a fine text that depicts people as they are, illustrates their essence, and demonstrates the importance of appreciating, without appropriating, their lives and ways of being.”

Dave is an artist, musician, and author of the book Djoliba Crossing, as well as the artist behind the Drawing on Culture series. You can learn more about his latest projects here, or feel free to contact him here.